A very dynamic system with a strong cold front will move through Central Alabama during the latter part of Friday and into the early morning hours on Saturday that will bring us a wide gamut of weather conditions… from strong to severe storms to sleet and snow. Here are my latest thoughts on what I see happening.

Rain and thunderstorms will begin moving up into the extreme southern and southeastern parts of Central Alabama during the late morning hours with that activity pushing from southwest to northeast. This activity will stay below severe limits at this point and will mostly be along and south of the I-85 corridor. Much of the rest of Central Alabama will be dry and will stay dry through nearly all of the daylight hours. Nearly all of this activity will push out of the area by the start of the evening, with maybe a few stray showers left over. Daytime highs will range from the upper 60s in the northwest to the mid 70s in the southeast.

The main rain and thunderstorm activity will begin to move into the area a few hours later around 8 pm and push eastward through the rest of the night and through the overnight hours. Here is where it gets interesting. At this point, sleet will become possible in the extreme northwestern parts of the state by 9 pm as the colder air begins to race in behind the cold front. This activity will continue to move east and southeastward, and by midnight, snow showers will be possible north of a line from Huntsville to Vernon, with a wintry mix spreading south of that to as far south as Fort Payne to Reform. 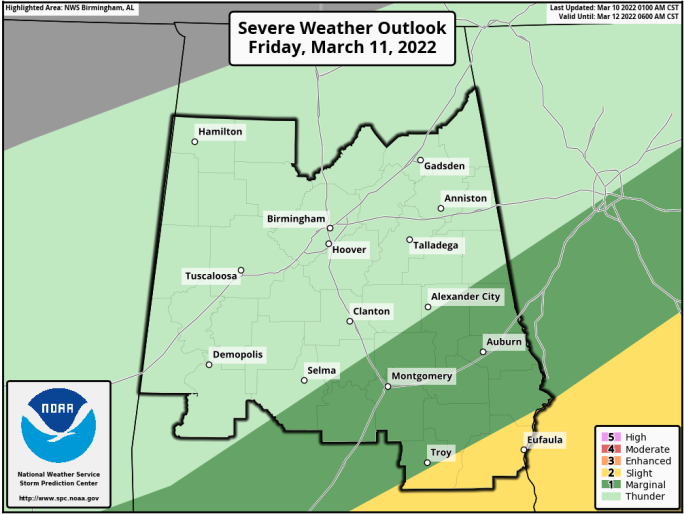 At the same time, strong to severe storms will be possible over the south and southeastern parts of the area with the main threat of damaging winds up to 60 mph, but I can’t rule out a brief tornado at this point as well. The severe threat will come to an end by 3 am Saturday. A Slight Risk for severe storms is up for locations along and south of a line from Dogwood Acres (southwestern Pike Co.) to Cottonton (southeastern Russell Co.). A Marginal Risk stretches north of that to as far north as Ellis (southern Dallas Co.) to Roanoke (southeastern Randolph Co.).

At this point, much, if not all, of the wintry precipitation will stay along and north of the I-20 and I-59/20 corridors throughout the remainder of the overnight hours, with all activity pushed out of the area an into Georgia by sunrise. A few stray flurries will be possible after that for a couple of hours, but nothing substantial.