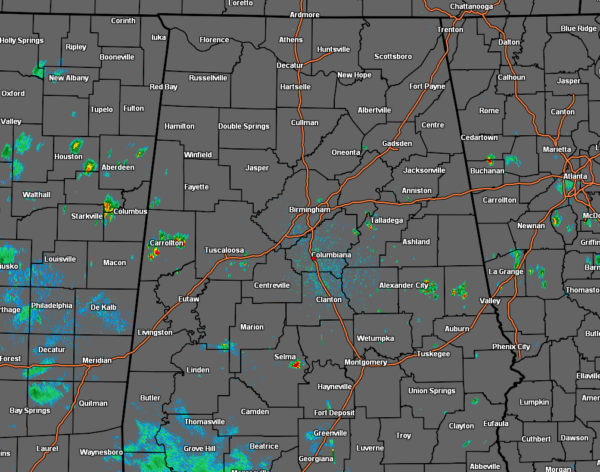 How’s the Weather Just Before 1 pm
While much of Central Alabama remains dry underneath partly to mostly cloudy skies, a few isolated showers have broken out over the southern half of the area. That activity is expected to increase as we continue to get warmer. Speaking of warm, temperatures as of the noon roundup were in the 80s with Eufaula leading the way at 88 degrees. Birmingham was at 84 degrees. Bessemer and Demopolis were tied as the cool spots at 81 degrees.

The Rest of the Central Alabama Weekend
Really, no change to the forecast… today will be a pretty typical day for the month of June. Skies will be partly cloudy and there will be a chance of scattered afternoon to early evening showers and thunderstorms. The higher rain chances will be south of the I-22 corridor in the western half of the area and south of the I-20 corridor in the eastern half. Afternoon highs will reach the mid to upper 80s. Shower chances will continue through the night with lows reaching the mid-60s to the lower 70s.

Moisture levels will rise on Sunday and so will the likelihood of scattered to numerous showers and thunderstorms throughout the entire day. Chances will be highest during the daylight hours then trending a little lower for the night. Highs will be in the upper 70s to the upper 80s.

Next Week
Model trends continue to show that the forecast will become repetitive for the first part of the week as we are seeing a pattern across Central Alabama that you would expect to see in June. Monday and Tuesday will feature the higher chances of scattered to numerous showers and thunderstorms as moisture levels continued to be increased. Skies will be mostly cloudy on both days with highs reaching the upper 70s to the mid-80s on Monday, then slightly warmer on Tuesday, reaching the mid-to-upper 80s for most across Central Alabama.

Moisture levels do drop off a little for midweek through the end of the workweek as the afternoon shower and storm activity will be more isolated and widely spaced in nature. At this point, we could see a dry day on Friday. However, the heat will begin to crank back up underneath mostly sunny skies with highs in the mid-80s to the lower 90s for the Wednesday through Friday stretch.

Expected Rainfall Totals For This Forecast Period
Even though we’ll have a chance for showers and thunderstorms on each day from now through Friday, the latest projected rainfall totals for Central Alabama ending on Friday evening at 7 pm show totals ranging from 3/4″ in the southeast to as high as 2″ along the Alabama/Mississippi state line.

Expected Temperatures For Outside This Forecast Period
Temperatures will begin to climb during the second half of the workweek and will stay really warm for the 4 days after the forecast period ends (June 12-15) as highs will be up in the mid to upper 80s for the Birmingham area. Expect temperatures slightly lower north of the Magic City and slightly warmer as you move south. 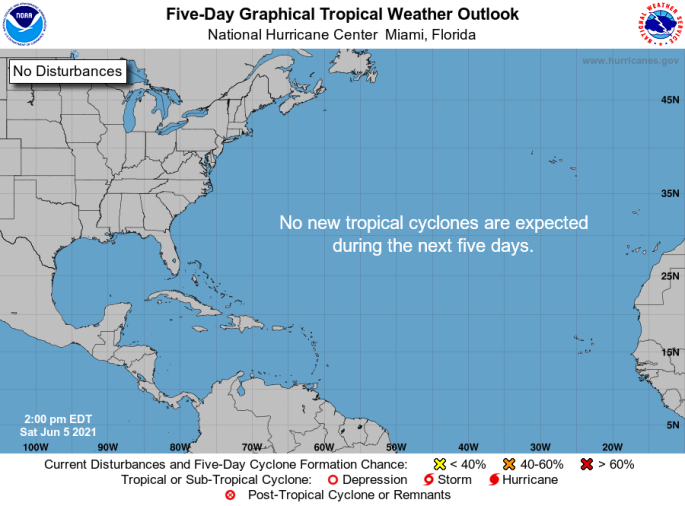 Tropical Update
Good news for the tropics… All remains quiet across the Atlantic Basin and no new tropical systems are expected to form within the next five days over the tropical Atlantic Ocean, Caribbean Sea, and the Gulf of Mexico.