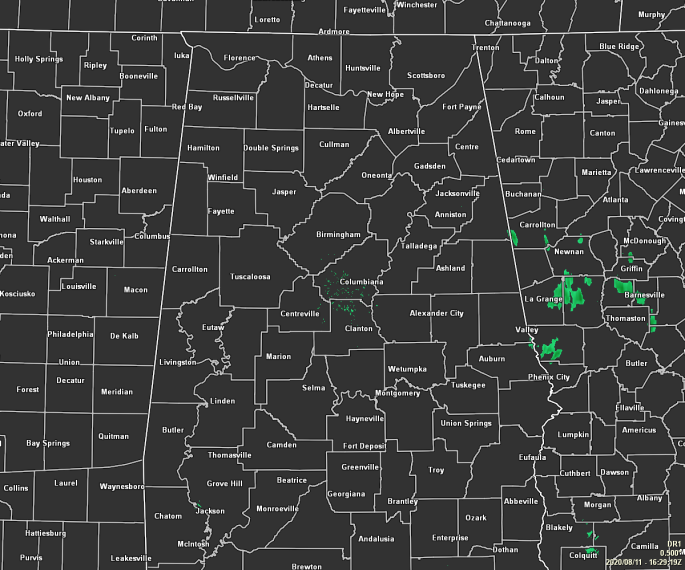 Radar is quiet across Central Alabama as we are making the run-up to the midday hour on this fair sky Tuesday morning. Temperatures were in the lower 80s to the lower 90s across the area as of the 11:00 am Hourly Weather Roundup from NWS Birmingham. Montgomery, Tuscaloosa, and Troy were tied as the hot spots at 91 degrees. Birmingham was sitting at 87 degrees. Pell City was the cool spot at 81 degrees. 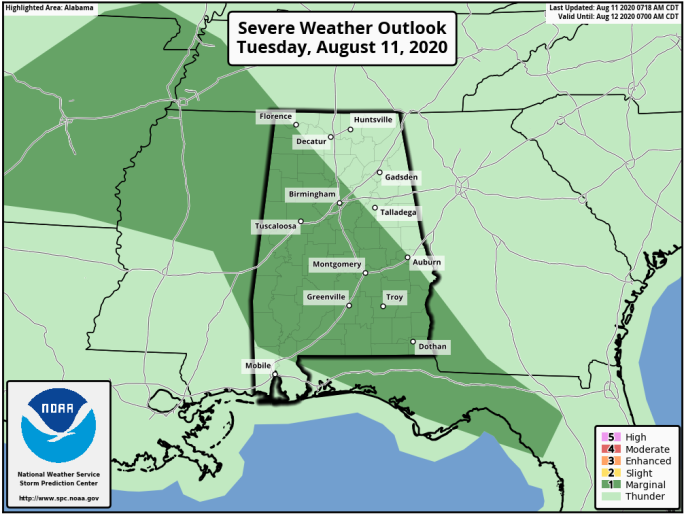 More Strong to Severe Storms Possible for Your Tuesday

The Storm Prediction Center has a Level 1 Marginal Risk up for much of Central Alabama and a good chunk of the western half of North Alabama for your Tuesday as strong to severe thunderstorms will be possible, similar to what we saw on Monday. The Marginal Risk includes locations along and south of a line from Florence (Lauderdale Co.) to Hayden (Blount Co.) to Auburn (Lee Co.).

According to the latest Hazardous Weather Outlook from NWS Birmingham, isolated strong to severe thunderstorms are possible this afternoon across all of Central Alabama. Brief damaging wind gusts and hail up to quarter size could occur.

The bottom line for today… Storms will fire up by the afternoon and some of which may become strong to severe. While there is a greater risk for those in the Marginal Risk area, a couple isolated strong to severe storms may be possible outside of that. Everything should calm down by bedtime tonight with skies becoming partly cloudy and lows in the lower to mid-70s.

NWS Birmingham is also warning about the heat as heat indices may approach 105 degrees for areas along and west of Interstate 65 this afternoon. Take extra precautions while outside. Afternoon highs will reach the mid to upper 90s across the area.

The good news for “Hump Day” is that temperatures look to step back a couple of degrees and there is no threat of organized severe storms at this point. However, scattered showers and storms look to start firing up as early as the late morning hours across the area and persist throughout the afternoon and early evening hours. Highs top out in the lower to mid-90s. 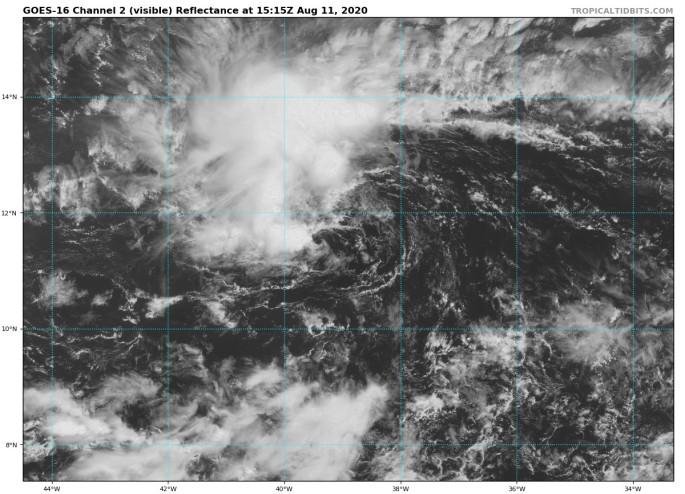 What’s Up With Invest 95L

As of 8:00 am this morning, a better-defined center of circulation is forming located about 900 miles west-southwest of the Cabo Verde Islands. In addition, the associated shower and thunderstorm activity has become more organized since yesterday. Environmental conditions are expected to become more conducive for additional development, and advisories could be initiated on a tropical depression as early as later today if these development trends continue. The disturbance is forecast to move west-northwestward at around 15 mph across the tropical Atlantic during the next few days, and conditions are expected to become less conducive for development by the end of the week. A tropical depression or storm is likely within the next 24-48 hours and would be named Josephine if it does become a tropical storm.