As of 10:57 am, radar appears to be all quiet across Central Alabama as skies are mainly sunny across the area. Temperatures are ranging from the lower 80s to the lower 90s across the area. Haleyville was the cool spot at 81 degrees. Troy and Montgomery were the hot spots at 90 degrees. Birmingham was sitting at 86 degrees.

We’ll have a few more clouds form with the heating of the day, but for the most part, we’ll have mostly clear to partly cloudy skies throughout the remainder of the daylight hours. We’ll have a very small chance of a few isolated showers across Central Alabama with the best odds of those occurring north of a line from Fayette to Birmingham to Gadsden. Afternoon highs will top out in the mid-80s to the lower 90s. While a lingering shower may be possible during the beginning of the night time, any activity will end quickly and we’ll have mostly clear skies for the late night and overnight hours. Lows will be in the mid-60s to the lower 70s.

Much of Central Alabama will be hot and dry on Wednesday, but there will be a very small chance of a few isolated showers or storms mainly east of I-65 and south of a line from Demopolis to Montgomery during the afternoon and early evening hours. Afternoon highs will be in the mid-80s to the mid-90s.

As of the 11:00 am update from the National Hurricane Center, the center of Isaias was located around 10 miles to the west-southwest of Wilmington, Delaware, and was moving to the north-northeast at 35 MPH. Maximum sustained winds continue to be around 70 MPH.

Widespread sustained tropical-storm-force winds and gusts to hurricane force are expected along the mid-Atlantic coast, including portions of the Chesapeake Bay region, through this afternoon, which could cause tree damage and power outages. Tropical storm conditions are expected to spread across New England tonight.

Heavy rainfall along the East Coast, near the path of Isaias, will result in flash flooding, some of which may be significant in the mid-Atlantic and Northeast through tonight. Potentially life-threatening urban flooding remains possible in Philadelphia and elsewhere along and just west of the I-95 corridor today. Scattered minor to moderate river flooding is likely across portions of the and the Mid-Atlantic. Quick-responding rivers in the Northeast will also be susceptible to minor river flooding.

WHAT’S UP WITH INVEST 94L 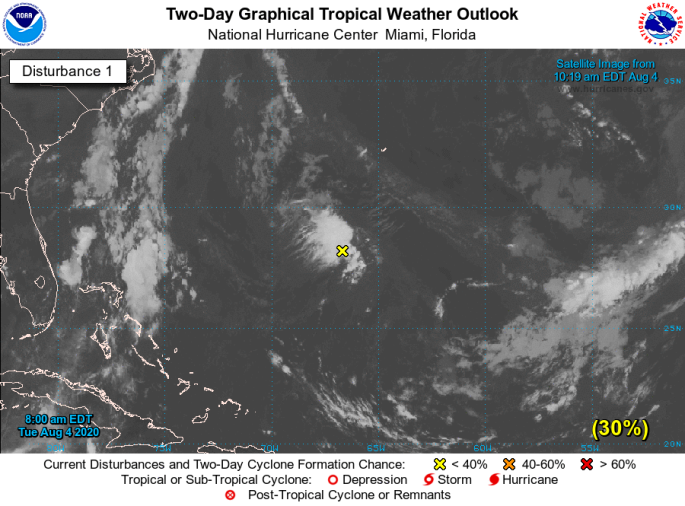 Invest 94L was located about 300 miles south-southwest of Bermuda. Although a weak area of low pressure is expected to form during the next day or so, abundant dry air surrounding the system is likely to limit significant development. This system is forecast to move northwestward at about 10 mph over the southwestern Atlantic today, stall several hundred miles southwest of Bermuda tonight, and then drift southwestward on Thursday.