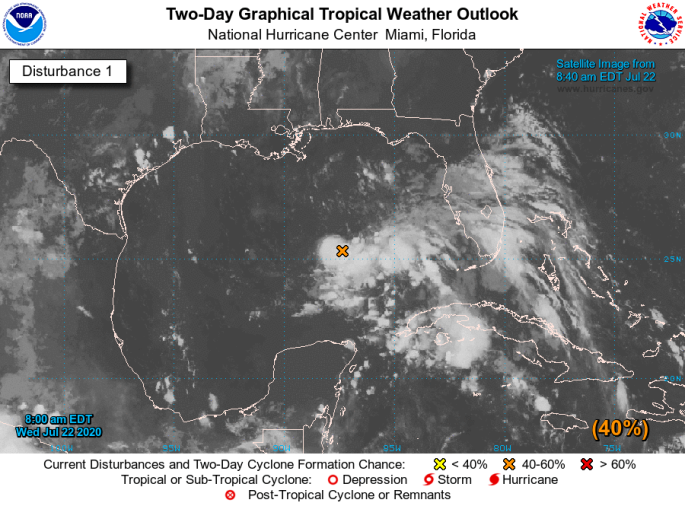 Looks like conditions have become a little more favorable for the disturbance moving across the Gulf of Mexico to become better organized and possibly form into a tropical depression over the next day or two. Here is the latest from the National Hurricane Center:

A tropical wave is producing a large area of disorganized showers and thunderstorms over the eastern Gulf of Mexico, central and southern Florida, and western Cuba. Gradual development of this system is possible while it moves west-northwestward, and a tropical depression could form during the next few days. This disturbance is expected to move over the central Gulf today, and reach the northwestern Gulf on Thursday and Friday. An Air Force Reserve Hurricane Hunter aircraft is scheduled to investigate the system later today, if necessary.
* Formation chance through 48 hours…medium…40 percent.
* Formation chance through 5 days…medium…50 percent.

At this point, there is no threat of landfall of this system to the Alabama Gulf Coast, but surf will become a little more active with wave height reaching 4 feet. The larger threat will be from life-threatening rip currents along the beaches from Dauphin Island eastward to Panama City Beach. Things will begin to calm back down as we reach the weekend. Scattered thunderstorms will be possible throughout the rest of the week with only slightly higher chances than normal with the passage of the disturbance. 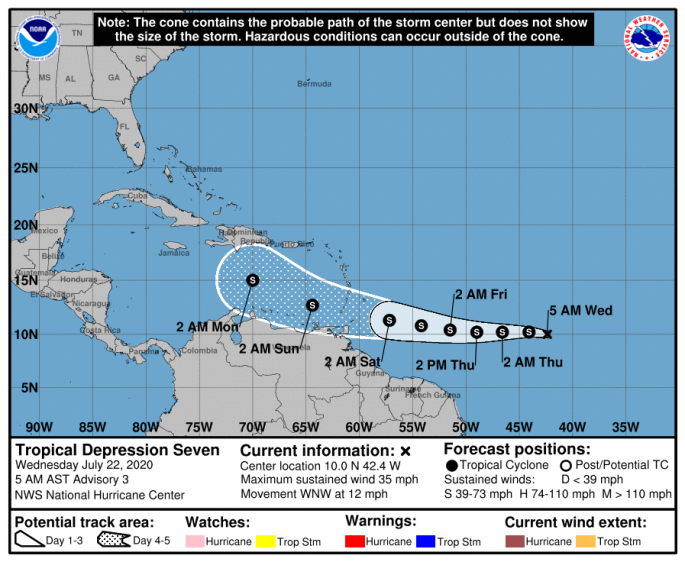 We also have a new tropical storm out in the Atlantic… Gonzalo is moving to the west-northwest and packing winds at 45 MPH. Here is the NHC update:

Satellite data indicate that Tropical Depression Seven has strengthened and is now Tropical Storm Gonzalo with 45 mph (75 km/h) winds. The intensity forecast will be updated in the regular advisory at 11 AM AST (10 AM CDT)…1500 UTC.

We’ll have to keep an eye on Gonzalo as it continues to move toward the Caribbean Sea. At this point, we do not know if it will make a trek into the Gulf of Mexico. The forecast models do not go out that far in the future, but the consensus shows that it is very possible for Gonzalo to move into the Gulf of Mexico by this time next week if it holds together.