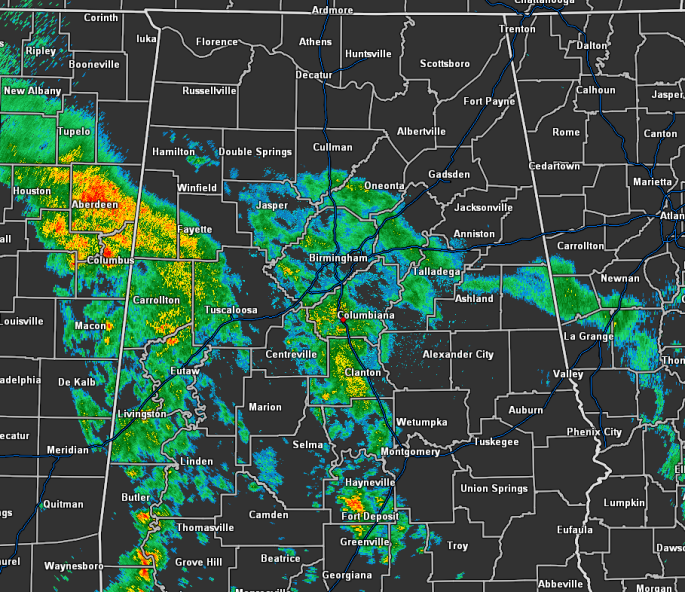 From NWS Birmingham: Two main feeder bands have set up in a south to north trajectory over the western and central portions of Central Alabama. These bands should continue with a bit of a north and westward movement as the center of the tropical system shifts in that direction.

Generally speaking, the welcomed rainfall will be moderate under these bands with 1 to 2-plus inches possible. There is an outside chance of higher amounts and some nuisance-type flooding through this afternoon, but that would be the exception and not the rule. Also, the orientation of the banded precipitation should limit the afternoon heating and thus the instability may struggle to reach values where a significant threat of severe weather and/or tornadoes will become a problem.

Keep in mind that as the system progresses further north and west, away from the state, that we move more into the southeast quadrant where the shear vectors are not as favorable for spin-up tornadoes. Overall, it appears as if the system in its entirety will bring much-needed rainfall to the area, but we will continue to monitor for any impacts through the rest of the afternoon hours.

TD CRISTOBAL SUMMARY OF 1000 AM CDT

DISCUSSION AND OUTLOOK
At 1000 AM CDT (1500 UTC), the center of Tropical Depression Cristobal was located near latitude 32.5 North, longitude 91.8 West. The depression is moving toward the northwest near 15 mph (24 km/h). A turn toward the north is expected tonight, followed by a faster north-northeast motion Tuesday and Wednesday. On the forecast track, the center of Cristobal should move through northeastern Louisiana today, through Arkansas and eastern Missouri tonight and Tuesday, and reach Wisconsin and the western Great Lakes by Wednesday.

Maximum sustained winds are near 35 mph (55 km/h) with higher gusts. Some weakening is forecast through Tuesday. However, Cristobal is expected to strengthen some as it becomes an extratropical low Tuesday night and Wednesday.

The estimated minimum central pressure based on surface observations is 995 mb (29.39 inches).

STORM SURGE: Water levels remain elevated along the Gulf coast and will begin to subside after the next high tide cycle.

SURF: Swells generated by Cristobal are still affecting portions of the northern and eastern Gulf coast, and are likely causing life-threatening surf and rip current conditions. These swells are expected to gradually subside throughout the day.

The National Hurricane Center has decided that this will be their last advisory on Cristobal. I’ll continue with updates throughout the remainder of your Monday on the impacts we may see from the tropical depression.