Saturday will start out dry, but it will be very humid and there may be some patchy dense fog around in some locations. It will be a backward day temperature-wise as we’ll have hotter conditions in the north than what we’ll see in the south. That is due to the fact that there will be higher rain chances in the southern half of Central Alabama. We’ll have partly to mostly cloudy skies throughout the day with isolated to scattered showers and storms forming during the afternoon and early evening hours. Afternoon highs will range from the upper 80s in the south to the mid-90s in the north. That’s right… Gadsden, Jasper, and Hamilton will be making a run at the hottest spots in the area.

Something very interesting will happen on Sunday as we’ll actually lose our chances for showers and thunderstorms across much of Central Alabama thanks to the subsidence caused by the approaching Tropical Storm Cristobal. All that sinking air will keep any storms from forming north of I-85 and US-80, but it looks like one of the outer rain bands may move into the extreme southern parts of the area during the late afternoon and early evening hours. What is amazing is that the GFS actually keeps us completely dry during the night and overnight hours. Skies will be mostly cloudy which will actually help to keep the highs down in the mid-80s to the lower 90s. With subsidence and bright sunshine, we could make a run at record high temperatures, but that won’t happen this time. 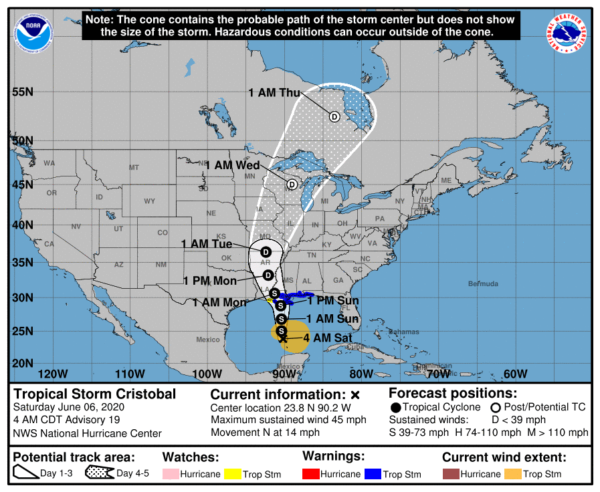 As of the 4:00 am update from the National Hurricane Center, Tropical Storm Cristobal was located about 370 miles south of the mouth of the Mississippi River and was moving to the north at 14 MPH. Maximum sustained winds were at 45 MPH and the minimum central pressure was at 29.44 inches or 997 MB. The current forecast track has Cristobal continuing to head north and eventually making landfall on the Louisiana Gulf Coast south of Houma late on Sunday night.

Tropical Storm Warnings are up from just east of Morgan City, Louisiana, to as far east as to the Okaloosa/Walton County line in Florida… which includes Dauphin Island, Fort Morgan, Gulf Shores, and Orange Beach. Storm Surge Warnings are up from the mouth of the Mississippi River to Ocean Springs, Mississippi. Storm Surge Watches are up in Florida from Indian Pass to Arepika, and in Louisiana from just east of Morgan City to the mouth of the Mississippi River. None of the Alabama Gulf Coast is in a Storm Surge Watch or Warning. If a surge does occur on the Alabama Gulf Coast, it will only be around 1 to 3 feet.

Tropical storm conditions are expected to start in the Tropical Storm Warning areas late tonight or early Sunday morning will and continue to be possible through all of Sunday. Rainfall amounts along the coast are expected to reach 4 to 8 inches with some localized amounts reaching as high as 12 inches. Some coastal flooding along with flash flooding will be possible. Large waves and deadly rip currents will batter the shoreline east of where the center is expected to make landfall over the next few days. A few waterspouts or brief tropical type spin-up tornadoes may be possible as well, especially in the northeast quadrant of Cristobal.

We’ll have frequent updates through the weekend and into the start of next week on Tropical Storm Cristobal.

Other than a little bit of a breeze and a good bit of cloud cover, Monday doesn’t look to be much different than a regular summer day in Central Alabama. We’ll have scattered showers and thunderstorms mainly becoming active during the afternoon and early evening hours, with much of the area staying dry through the morning time. Highs will stay a little lower in the mid to upper 80s.

As the remnants of Cristobal start to move northeast from Missouri into Illinois on Tuesday, we start to see an arm of tropical moisture take shape from the Gulf of Mexico up to the former tropical storm. Showers and thunderstorms will become likely at any time especially during the second half of the day. Skies will be mostly cloudy when no rain is falling and highs will be in the lower to mid-80s.

That arm of moisture turns into a boundary that will move through much of Central Alabama on Wednesday, but it will stall out just south of the area on Thursday. Showers and storms continue to be likely on “Hump Day,” especially during the main heating of the day. Highs will start to warm back up into the mid to upper 80s.

MUCH OF THE AREA STAYS DRY TO END THE WORK WEEK

That stalled boundary will be far enough south that Thursday now looks to stay dry throughout the day according to this run of the models. Highs will be in the mid to upper 80s.

Friday looks to be pretty similar but we will be on the bottom side of a trough. We could see some energy moving through the extreme northern parts of the area that may set off a stray shower or two, but that looks unlikely at this point. Highs will be in the mid-80s to right at or just over 90 degrees.