While much of the I-65 corridor is getting a little break in the action for a few minutes, we continue to have a mass of rain and thunderstorms covering much of North/Central Alabama, with the stronger storms occurring over portions of Bullock, Macon, Lee, and Russell counties at the moment. The good news is that everything in our neck of the woods is relatively behaving, but these moderate to heavy thunderstorms will continue to pile on to the rainfall totals and may continue to aggravate any flooding issues.

The warm front has not made that much progress to the north during the evening hours and has kept the severe threat mainly located over the extreme southern parts of Central Alabama. We’ve had a couple of severe thunderstorm warnings and a tornado warning in the south and southwestern parts of the area, but so far, no damage has been reported with any of those storms.

The current location of the warm front appears to be over the southern portions of Marengo County and stretching southeastward to the northern parts of Pike County and the middle portions of Barbour County.

Instability continues to be on a steep increase south of the warm front, but levels have dropped and are only maxing out around 2000 J/kg in the extreme southern and southeastern parts of the area.

At this point, it looks like the best chances for stronger to severe storms will be over the extreme southern portions of Central Alabama and down into all of South Alabama. I would say that north of a line from Eutaw to Clanton to Dadeville will just see mainly normal rain and thunderstorms, but we can’t completely rule out an isolated severe storm with strong winds and large hail. 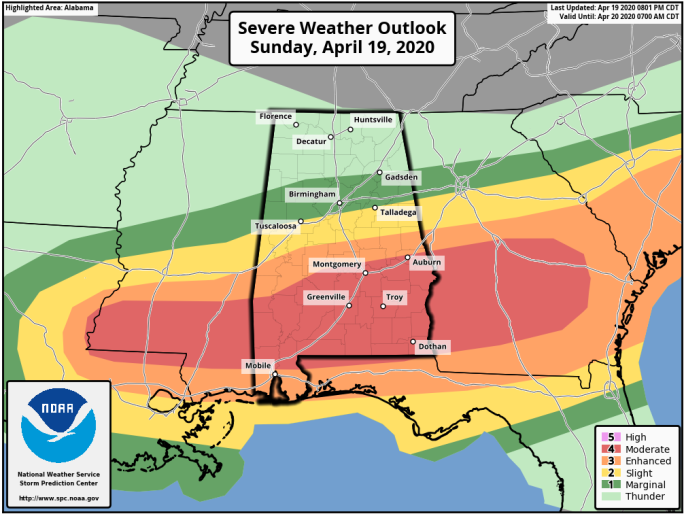 The latest update is out from the Storm Prediction Center and they have pushed the LEVEL 4 MODERATE RISK a little farther to the south to include locations south of a line from Sweet Water (Marengo Co.) to Wetumpka (Elmore Co.) to Opelika (Lee Co.).

The LEVEL 3 MODERATE RISK is up for locations as far north as York (Sumter Co.) to Clanton (Chilton Co.) to Alexander City (Tallapoosa Co.).

The LEVEL 2 SLIGHT RISK is up for locations as far north as Aliceville (Pickens Co.) to Chelsea (Shelby Co.) to Ranburne (Cleburne Co.).

The LEVEL 1 MARGINAL RISK is up for locations as far north as Crossville (Lamar Co.) to Colony (Cullman Co.) to just north of Pleasant Gap (Cherokee Co.)