We continue to see a threat of heavy rainfall amounts across all of North Alabama and a good chunk of Central Alabama throughout the entire day, along with a very low-end threat of a few severe storms over the west and southwest portions of Central Alabama starting this afternoon through tonight.

The latest radar image as of 10:30 am shows a good bit of light to moderate rainfall covering nearly all of North/Central Alabama at this point. There may be a few rumbles of thunder in the southwestern parts of Tuscaloosa County at this time, but don’t believe there is any lightning anywhere else.

The Storm Prediction Center has a Marginal Risk for severe storms (level 1 of 5) up for locations south and west of a line starting from Hamilton (Marion Co.) and stretching to Concord (Jefferson Co.) to Selma (Dallas Co.). While not likely, a few thunderstorms are possible across the rest of North/Central Alabama.

Over the Marginal Risk locations, the main window for stronger to severe storms will be from 12 pm to 9 pm today. Isolated damaging winds up to 60 MPH and a brief tornado may be possible. Surface-based instability will be very low in these locations, but there will be enough shear and helicity to warrant this very low-end severe storm threat. 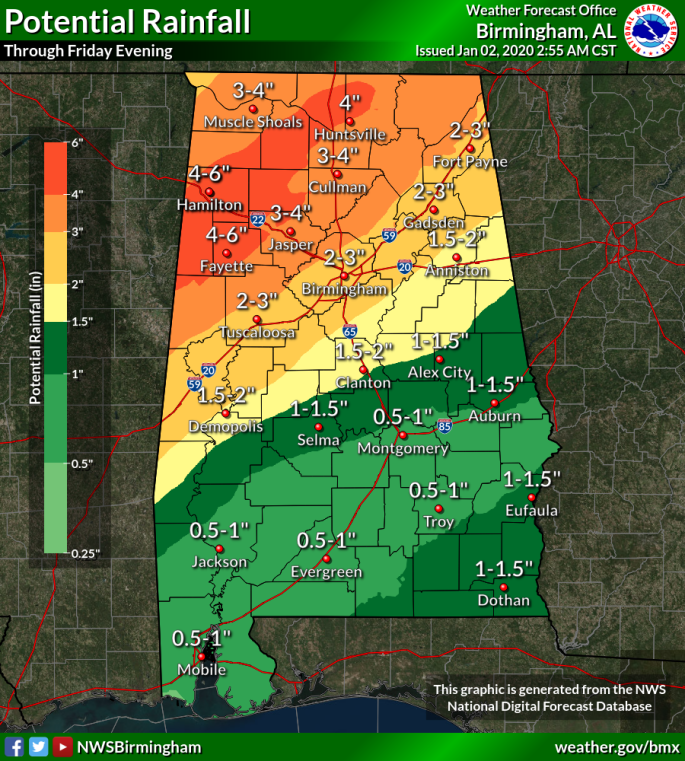 The much larger story with this system will be the amount of rainfall we could see from now through Friday evening. The latest projections from the NWS’ National Digital Forecast Database show a wide range of amounts as low as 1/2 inch for the extreme southern parts of the area to as high as 6 inches for the northwestern parts of Central Alabama and into the west-central parts of North Alabama.

While it won’t rain every second of the time through the next 48 hours, rainfall is not expected to come to an end until the morning hours on Saturday (animation is from 12z run of the high-resolution NAM valid from 10 am today through 7 am Saturday). We could see a lull in the rainfall across much of the area later this afternoon through roughly 9-10 pm tonight when a line of rain and storms will begin to push into the western parts of the area.

Remember, if you see a roadway covered with water, TURN AROUND AND DON’T DROWN. No matter if you know the roadway or not, there could be hidden dangers underneath the water that could cause your vehicle to become inoperative and put you in life-threatening danger.