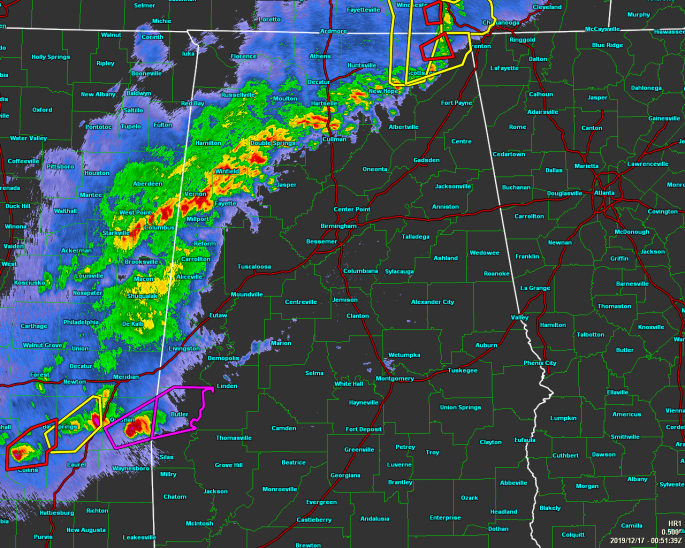 Two areas of tornadic develop have developed near Central Alabama. One area was associated with a bookend vortices/rotating comma head that just missed Marion County and traveled through the Tennessee Valley. An additional area was across south-central Mississippi where a few more tornadoes have been confirmed.

Radar extrapolation and the latest Hi-Res suite continue to indicate that the activity in south Mississippi merges into the broken convective to its north and west. This activity will enter into west-central Alabama around 9 pm or so.

MLCAPE values are 500-1000 across west-central Alabama with SRH values at least 300. Bulk shear vectors are in a favorable orientation. STP over southern Mississippi is 3-4 and forecast to slightly decrease with time. Mid level lapse rates are good in the 7.5 range. This is a typical winter scenario where the main dynamics lift northward, and a delicate balance between shear and instability will need to be realized. There certainly is a threat of tornadoes and other modes of severe weather and will continue the watch for most locations. The challenge remains how far east will the favorable atmosphere gets to. The activity is almost out of Marion and Lamar, so once this moves through, the threat there should be over.

Precipitable water values increase to 1.5 inch range or better as the system moves through. Some areas will receive 1 to 2 inches of rain with most closer to 1 inch. Due to rain rates, some ponding of the water on roadways is possible but widespread flooding is not anticipated.