REMNANTS OF OLGA EXPECTED TO BRING HEAVY RAIN AND SEVERE WEATHER TO THE CENTRAL
GULF COAST AND LOWER MISSISSIPPI VALLEY ON SATURDAY. 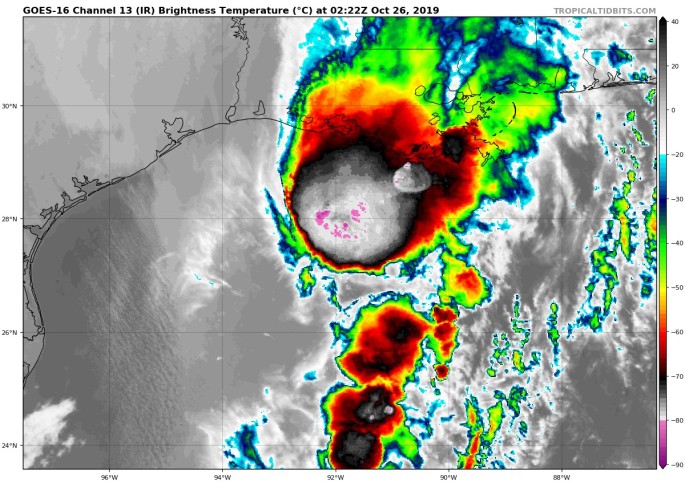 DISCUSSION AND OUTLOOK
———————-
At 1000 PM CDT (0300 UTC), the center of Post-Tropical Cyclone Olga was located near latitude 27.8 North, longitude 92.2 West. The post-tropical cyclone is moving toward the northeast near 17 mph (28 km/h). Olga is forecast to move quickly northward to north-northeastward on Saturday and then turn northeastward late Saturday or Sunday. On the forecast track, the center of the post-tropical cyclone will move up the Mississippi Valley tomorrow and toward the Great Lakes later this weekend.

Maximum sustained winds are near 50 mph (85 km/h) with higher gusts. Weakening is expected after the cyclone moves over land Saturday morning. Tropical-storm-force winds extend outward up to 140 miles (220 km) from the center. The estimated minimum central pressure based on earlier data from an Air Force Reserve hurricane hunter aircraft and surface observations over the northern Gulf of Mexico is 999 mb (29.50
inches).

HAZARDS AFFECTING LAND
———————-
WIND: Gale-force winds associated with Olga and its remnants should spread over portions of the northern Gulf coast tonight and Saturday morning.

NEXT ADVISORY
————-
This is the last public advisory issued by the National Hurricane Center on this system.