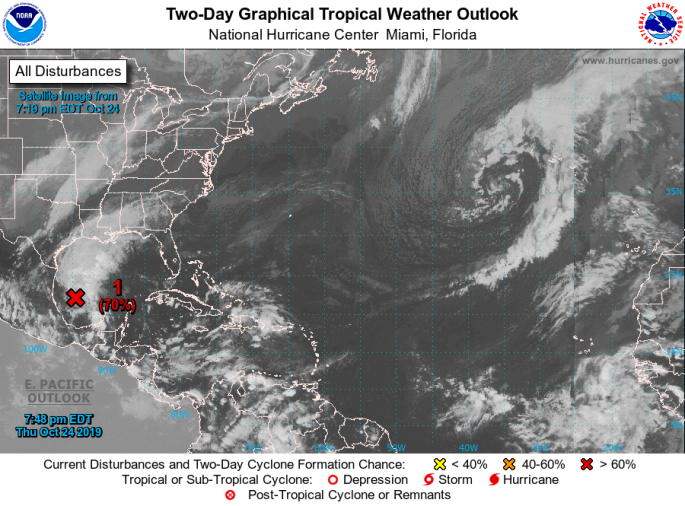 This is the latest from the National Hurricane Center on Invest 97L located over the western Gulf Of Mexico:

Showers and thunderstorms associated with a low-pressure system located over the southwest Gulf of Mexico continue to show signs of organization. Although recent visible satellite imagery indicates that the disturbance still does not have a well-defined center, further development is anticipated and there is a high chance that a short-lived tropical depression will form later tonight or on Friday. The system is forecast to merge with a cold front or become post-tropical late Friday or Saturday over the central Gulf of Mexico. Regardless of development, gale-force winds are expected behind the cold front over the western Gulf of Mexico on Friday and Saturday.
* Formation chance through 48 hours…high…70 percent.
* Formation chance through 5 days…high…70 percent.

The latest consensus run of the global and hurricane models shows the path of the central low projected to move north-northeastward with nearly every model having it pass through Mississippi and nearly following the Mississippi River. Only one member has the low moving through west and central parts of Central Alabama within the next 48 hours. 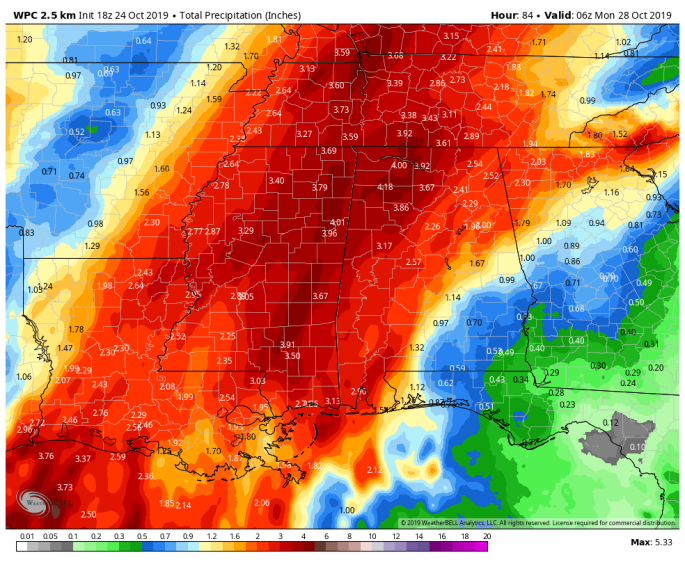 The latest projected rainfall amounts through midnight Sunday night from the WPC show that much of the rainfall will occur near and just to the right of where the low moves through the southeast. There is a big spread of totals across Alabama with only 1/2-inch of rain expected in the southeastern corner of the state while as high as 4.25 inches may be possible in the northwestern parts of the state. At this point, we could see as much as 2.25 inches in Birmingham.

While Invest 97L is only expected to become a tropical depression, that energy combined with the strong cold front could cause some gusty winds at times especially just ahead of the front and with the frontal passage. This is the latest run of the European model showing peak wind gusts through midnight Sunday night. You can see potential gusts as high as 50 MPH in the northwestern parts of the state, while peak gusts look to only top out in the 30-40 MPH range in the southeastern corner. The Birmingham metropolitan area could see gusts as high as 40 MPH.

Instability values will be rather low and lapse rates will be weak, so we do not expect any organized severe weather with the combo tropical/cold front event on late Saturday through early Sunday morning. We could see a few stronger storms with gusty winds, especially closest to the low-pressure center of the disturbance. We may possibly see a wind advisory issued for parts of the area at some point maybe as early as Saturday morning, but we’ll get confirmation with that from the NWS.