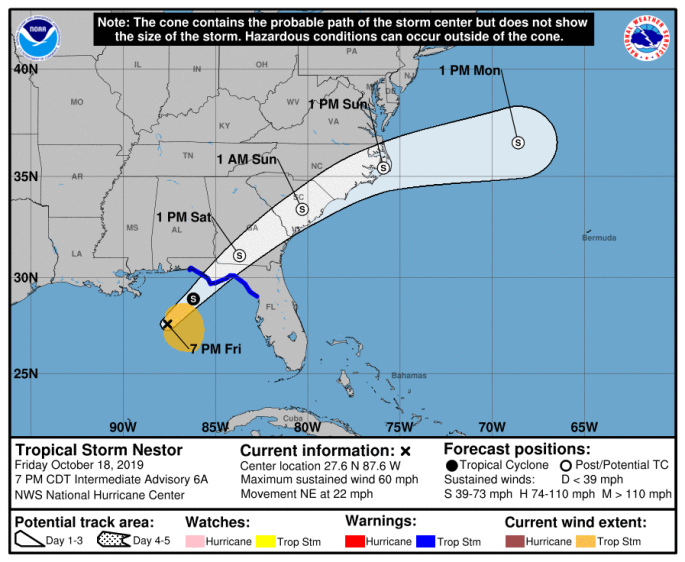 SUMMARY OF WATCHES AND WARNINGS IN EFFECT

At 700 PM CDT (0000 UTC), the center of Tropical Storm Nestor was located near latitude 27.6 North, longitude 87.6 West. Nestor is moving toward the northeast near 22 mph (35 km/h), and this general motion is expected to continue through Saturday. A turn toward the east-northeast is expected to occur Sunday. On the forecast track, the center of Nestor will move inland over the Florida Panhandle on Saturday morning, and will then move across portions of the southeastern United States later Saturday and Sunday while it becomes a post-tropical cyclone. Nestor is expected to move offshore of the coast of North Carolina into the western Atlantic by late Sunday.

Maximum sustained winds are near 60 mph (95 km/h) with higher gusts. Some strengthening is possible tonight before Nestor reaches the coast. Nestor is forecast to weaken after it moves inland, and it is expected to lose tropical characteristics and become post-tropical on Saturday.

Tropical-storm-force winds extend outward up to 140 miles (220 km), mainly to the northeast and east of the center. The estimated minimum central pressure is 999 mb (29.50 inches).

STORM SURGE: The combination of a dangerous storm surge and the tide will cause normally dry areas near the coast to be flooded by rising waters moving inland from the shoreline. The water could reach the following heights above ground somewhere in the indicated areas if the peak surge occurs at the time of high tide…

Surge-related flooding depends on the relative timing of the surge and the tidal cycle and can vary greatly over short distances.

WIND: Tropical storm conditions are expected to reach the coast within the warning area later tonight, and continue through early Saturday. Gale-force winds are likely along portions of the Atlantic coast of the southeastern United States on Saturday.

RAINFALL: Nestor is expected to produce total rainfall accumulations of 2 to 4 inches this weekend from the central Gulf Coast and northern and central Florida to the eastern Carolinas, with isolated maximum amounts of 6 inches.

TORNADOES: A tornado or two is possible through Saturday morning across the northern and central Florida Peninsula.