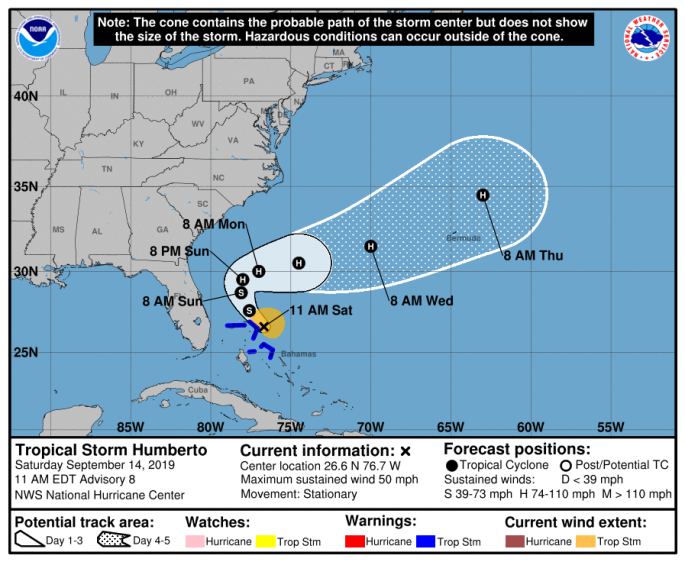 The center of Humberto is better defined today, but due to shear, it is still located south of the main area of deep convection. Satellite images indicate that a cyclonically-curved convective band is also developing southeast of the center. Recent reports from an Air Force reconnaissance plane indicate that the winds have increased, and the maximum intensity has been adjusted upward to 45 kt. These strong winds are confined to the north and east of the center of the cyclone.

The current unfavorable shear over Humberto is forecast to weaken, and since the cyclone is expected to move over warm waters, the NHC forecast calls for strengthening. Humberto is anticipated to become a hurricane in about 36 hours over the western Atlantic well east of the Florida east coast and well away from the Bahamas. The intensity forecast is consistent with the solutions of the consensus model and the corrected consensus HCCA. In addition, all global models intensify Humberto and show an increase in the size of the storm.

Satellite and reconnaissance fixes indicate that Humberto has barely moved during the past few hours. Humberto is being trapped by a ridge to the north, but this feature is forecast to weaken. The expected flow pattern should steer the cyclone very slowly toward the northwest and north during the next 24 to 36 hours. After that time, the cyclone will encounter the mid-latitude westerlies, and most likely, Humberto will sharply recurve northeastward away from the United States with no significant increase in forward speed. Only by the end of the forecast period, Humberto should begin to accelerate. The NHC forecast is very consistent with the track guidance which clearly depicts the slow motion of the system and the sharp turn to the right in 2 or 3 days.