At 12:10 pm, we have a good bit of scattered shower and thunderstorm activity over the northern half of the area while a few isolated showers and storms have popped up over the southern half of Central Alabama. None of these showers or storms are particularly strong at the moment, but some of these do include dangerous cloud-to-ground lightning. All of the activity is pushing off slowly to the east-southeast. Temperatures were in the lower 80s to the lower 90s across the area. Birmingham was at 90 degrees. The cool spot was Alabaster at 81 degrees with rain-cooled air. The hot spot was Uniontown at 93 degrees.

For today, we’ll continue to have a chance of isolated to scattered showers and thunderstorms across Central Alabama for the remainder of the afternoon and into the early evening hours. Highs will top out in the upper 80s to the mid-90s. Rain chances will range from 20%-50%, but the highest chances will be north of the I-85 corridor. For tonight, much of the activity will diminish after the sun goes down, but a few showers and storms could linger around for several more hours. Lows will be in the upper 60s to the lower 70s.

Much of the same story for Thursday as we’ll continue to have a chance of isolated to scattered showers and thunderstorms mainly during the late morning through the early evening hours. Afternoon highs will be in the lower to mid-90s. Rain chances will be in the 20%-50% range once again, with the highest chances coming along and south of the I-59 corridor down to the I-85 corridor. 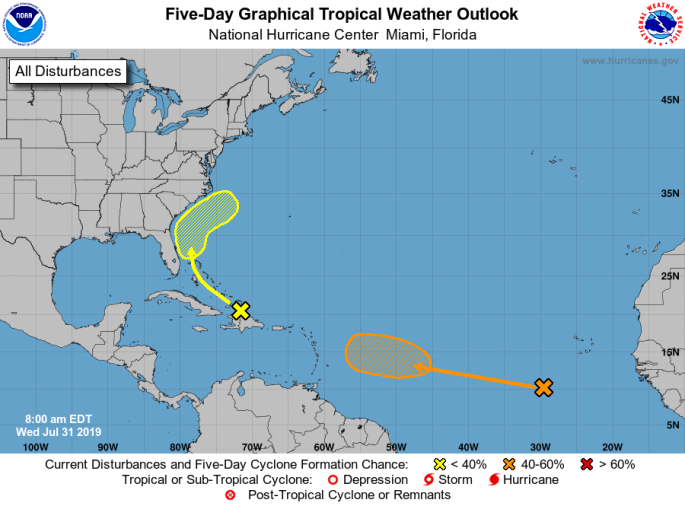 INVEST 95L OVER THE CARIBBEAN
A disorganized tropical wave continues to bring showers and thunderstorms to the Virgin Islands, Puerto Rico, and Hispanola. It will begin to curve to the northwest at 10 MPH and head toward the eastern coast of Florida and the Bahamas over the next few days. Some development could occur once it reaches there, but the NHC is only going with a 10% chance of it developing into a depression within the next five days.

EYES ON THE TROPICAL WAVE OVER THE EASTERN ATLANTIC AS WELL
A little higher risk of development for the wave that is currently moving westward around 15 MPH across the eastern Atlantic Ocean. Conditions are not favorable at this point, but it will move into better conditions by the end of the week and weekend where we could see a depression form well east of the Lesser Antilles. At this point, NHC is giving it a 50% chance of developing into a depression within the next 5 days.