HOT BUT NOT UNBEARABLE THROUGH THE WEEKEND
With high pressure staying close by just off to the northeast over the Appalachian Mountains, we will stay dry throughout the weekend with dewpoints remaining in the lower 60s keeping the afternoons more comfortable than what we are used to during this time of the year. Both days will start with mainly clear skies but there will be some clouds form with the heating of the day making skies partly cloudy by the mid-afternoon hours. Highs on both days will be in the upper 80s to the lower 90s.

START OF THE WORK WEEK REMAINS DRY, RAIN CHANCES INCREASE ON TUESDAY
Troughing will begin to move toward Central Alabama from the north on Monday, but we’ll remain dry and hot. Skies will be mostly sunny with highs reaching the lower to mid-90s. A surface front will begin to work through the area on Tuesday that will bring a chance of showers and thunderstorms through the late morning through the end of the afternoon, but it will diminish before it gets a chance to exit the area. Rain chances will be greatest over the west and northwestern parts of the area, especially north and west of the I-59 corridor. Tuesday’s highs will be in the upper 80s to the mid-90s across the area.

CLASSIC SUMMERTIME PATTERN RETURNS TO END OUT THE WORK WEEK
As stated, we get back into a hot and humid weather pattern across Central Alabama with the standard risk of a few isolated afternoon showers and thunderstorms on each day. While clouds will build during the main heating of the day and convective showers form, the mornings will start with mainly clear skies. Highs on each day will be in the upper 80s to the lower 90s.

VOODOO LAND
At this point, there doesn’t look like there will be a big change in temperatures with highs topping out in the lower 90s and lows reaching the lower 70s through Sunday, August 4th. Other than the typical small risk of scattered afternoon thunderstorms, the next big rain chance looks like it will be moving into the area late Wednesday, August 7th. 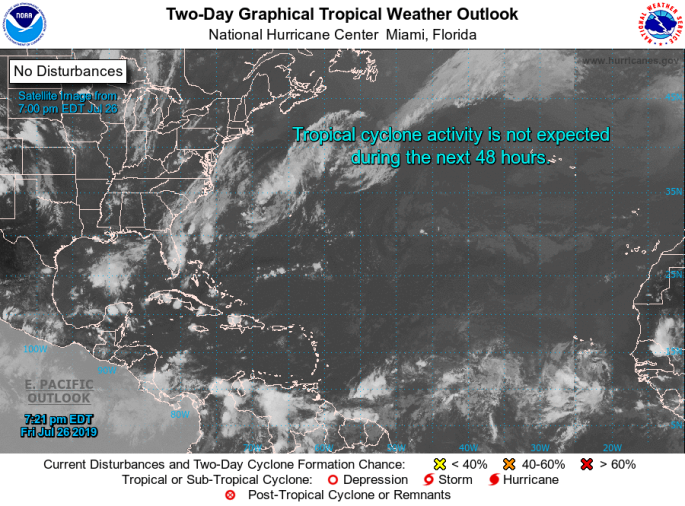 THE TROPICS
All is quiet across the Atlantic Basin and no tropical systems are expected to develop within the next five days.

As I have said before, this site is a work in progress, just like I am. Have a great night and God bless!