We have a surface boundary set up across the northwestern parts of the state that has become a mechanism to help showers and thunderstorm to develop easier with the heating of the day across the extreme northern and northwestern parts of Central Alabama and up into a good bit of North Alabama. We also have some spotty showers developing over the extreme southern and southeastern parts of the area thanks to the influence of Tropical Storm Barry. None of these are strong at the moment, but there is a good bit of lightning with the storms over the northern parts of Winston County. Activity in the north is moving to the southeast while the activity in the south is moving northwest.

Temperatures at this time were mostly in the mid-80s to the lower 90s across the area, but the cool spot is Haleyville at 75 degrees thanks to rain-cooled air. Birmingham was at 90 degrees. Uniontown was at 92 degrees as the warm spot.

SCATTERED TO NUMEROUS STORMS EXPECTED THROUGH THE DAY
With a surface boundary approaching from the north and stalling out over the northwestern parts of the state, and bands moving in from the Gulf of Mexico, we’ll see an enhanced risk for scattered to numerous showers and thunderstorms throughout the day and into the early evening hours. Afternoon highs will be in the lower to mid-90s across the area. While there is no threat of organized severe storms today, a few of these thunderstorms could become strong with gusty winds.

For later this evening and through the overnight hours, much of the convection will die off and allow much of the shower and thunderstorm activity to diminish, but a few lingering showers and storms are possible especially near the boundary in the northern parts of the area. Lows for tonight will be in the lower to mid-70s.

HEAT ADVISORY THROUGH THIS EVENING

A Heat Advisory continues until 6:00 pm this evening for parts of Central Alabama including Blount, Fayette, Greene, Hale, Jefferson, Lamar, Marengo, Marion, Pickens, Sumter, Tuscaloosa, Walker, and Winston counties. Heat indices will once again approach or exceed 105 degrees in the advisory locations during the main heating of the day thanks to the higher humidity levels from the tropical moisture flowing in from the Gulf and afternoon highs expected to reach the lower to mid-90s.

INCREASED SHOWER AND STORM CHANCES CONTINUE ON FRIDAY
While we’ll have the possibility of a few scattered showers and storms across the northern half of the area during the morning hours, much of the activity will fire up during the late morning and through the afternoon and into the early evening hours. For the southern half of Central Alabama, those scattered to numerous showers and storms will be more likely as we’ll continue to see more moisture move in from the Gulf with bands associated with Barry. Afternoon highs will be in the upper 80s to the lower 90s across the area.

Latest update from the National Hurricane Center as of 10:00 am has Barry located around 95 miles south-southeast of the mouth of the Mississippi River and around 200 miles southeast of Morgan City, Louisiana. Maximum sustained winds are up to 40 MPH and movement is off to the west at 5 MPH.

The current forecast track has the center of Barry moving westward for around 24 to 30 more hours before making a turn northward and making landfall somewhere on the Louisiana Gulf Coast just west of Morgan City. Of course, the effects of Barry will be felt for hundreds of miles away from the center from now until the system finally weakens and moves well out of the southeastern US.

While our weather will be a little more active today thanks to the surface boundary in the north and feeder bands moving in from the south, our wettest days seem to be on Saturday and Sunday at this point. That will be when the center of Barry moves onshore and moves northward through the extreme eastern parts of Louisiana and Arkansas. In most cases, the eastern side of a tropical system is usually the wetter side, so that is when we should see a greater coverage in rainfall and perhaps some breezy winds. Any jog to the east of that track could bring a higher risk of heavier rainfall, stronger winds, and a threat of a few brief spin-up tornadoes. I’ll keep a close watch on Barry throughout the rest of the week and weekend.

BARRY AIN’T THE ONLY ISSUE IN THE TROPICS 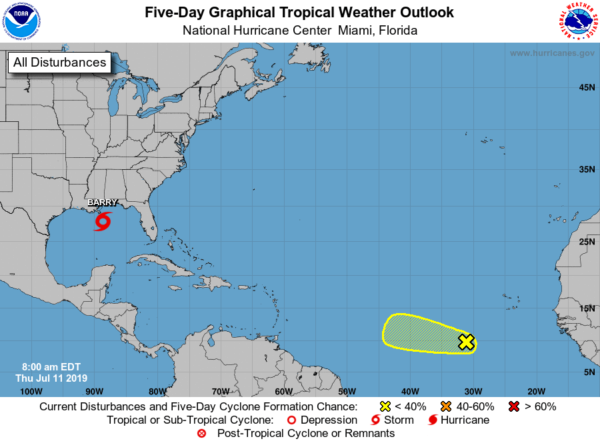 We have a tropical wave that has formed and is located several hundred miles to the southwest of the Cabo Verde Islands. The environmental conditions will eventually disrupt this disturbance over the weekend, but some development could occur over the next 24-48 hours. The NHC is only giving this disturbance a 10% chance of becoming a tropical cyclone within the next five days.