As you can see by the visible satellite/composite radar image above, Central Alabama is under mostly sunny skies with a few fair-weather cumulus clods floating overhead. The system that brought us all of the much needed rainfall is pushing off to the east, with the nearest rain activity to us is over in eastern Georgia and into South Carolina. 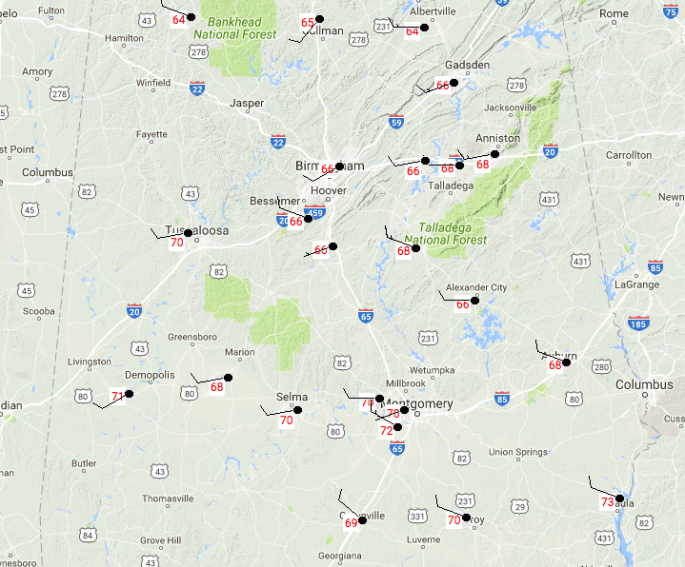 With us on the back side of the upper trough, cooler and drier air is flowing into Central Alabama. The temperature readings at 11:40AM are coming in with mid 60s to the lower 70s across the area. Haleyville is the current cool spot at 64 degrees, with Eufaula as the warm spot at 73 degrees.

For the rest of the day, skies will be mostly sunny, and temperatures will be really comfortable… but if you are heading to the pool, you will be really cool. Afternoon highs are going to be in the mid to upper 70s for much of Central Alabama. Skies will continue to clear out this evening, with temperatures in the lower to mid 70s at 7PM, and dropping to the mid to upper 50s across much of the area for overnight lows.

A fabulous but much warmer day is in store for Central Alabama on Friday… Skies will be mainly sunny, and afternoon highs will top out in the mid to upper 80s across the area. For the evening time, temperatures will start of in the lower 80s across the area under mostly clear skies at 7PM. Clouds will start to move in during the overnight and early morning hours on Saturday, and lows will be in the mid to upper 60s.

BEACHBOUND: For a detailed look at the weather from Fort Morgan over to Panama City Beach, Click here to see the AlabamaWx Beach Forecast Center page.

ON THIS DAY IN WEATHER HISTORY – 1990
Evening thunderstorms spawned four tornadoes in Kansas and Missouri, and there were three dozen reports of large hail or damaging winds. Thunderstorms produced hail two inches in diameter at Cole Camp, and wind gusts to 72 mph at Rosebud. Heavy thunderstorm rains produced flash flooding in central Missouri. Flood waters swept through Washington State Park southwest of Saint Louis, and nearly one hundred persons had to be rescued from water as much as twenty feet deep. The flood waters swept away a number of vehicles, some were carried as much as four miles away. 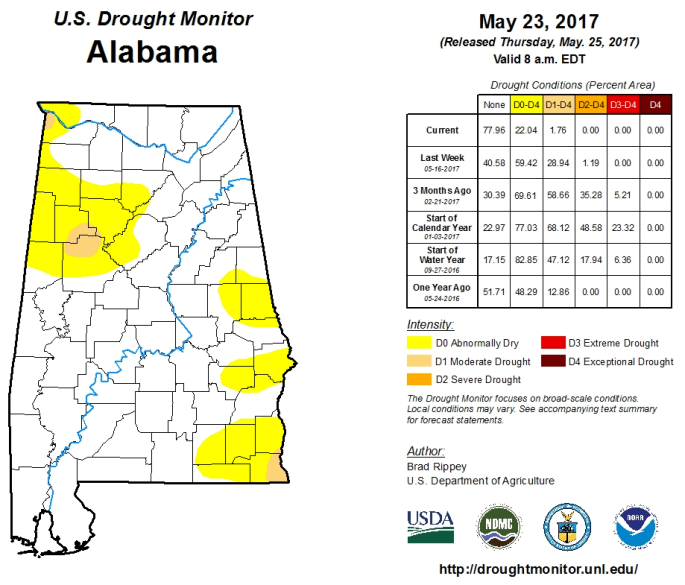 DROUGHT MONITOR
As you can see by the latest image from the US Drought Monitor, almost all of Alabama is out of the drought at this point. Only 1.76% of the state is considered in a moderate drought, while only 22.04% of the state is in the abnormally dry definition. For the year so far, Birmingham is now 4.53″ above normal, while Montgomery and Troy are both 10.79″ above normal. That is a huge difference from just 6 months ago.