Just an absolutely beautiful day across Central Alabama as we are starting to approach the noon hour. Skies across the area are completely clear, allowing for maximum sunshine to reach the surface. And , of course, with maximum sunshine, that also means no rain at all anywhere near the area. The closest shower activity to us at this point is well back to the west over the south-central parts of Arkansas.

Temperatures at 11:12AM are currently running in the 70s across the area, with mostly lower to mid 70s north of the I-20 corridor, and mid to upper 70s to the south of that. The cool spot at this time is Cullman at 69 degrees, while the warm spot is currently Eufaula at 78 degrees.

For the remainder of the day today, no clouds will be able to take away the sunshine at all. Skies will be clear throughout the afternoon and into the evening hours tonight. Afternoon highs will be in the lower to mid 80s across the area. Winds will be light for the most part, out of the west to northwest at 5-10 MPH. Overnight lows will fall into the 50s throughout the area, under clear skies.

On Wednesday, we’ll have an approaching trough that will bring in an increase in cloud cover and the risk for rain, especially for the late evening and into the overnight hours. The daytime hours on Wednesday will be warm under mostly clear to sunny skies. Afternoon highs will be in the lower to mid 80s. 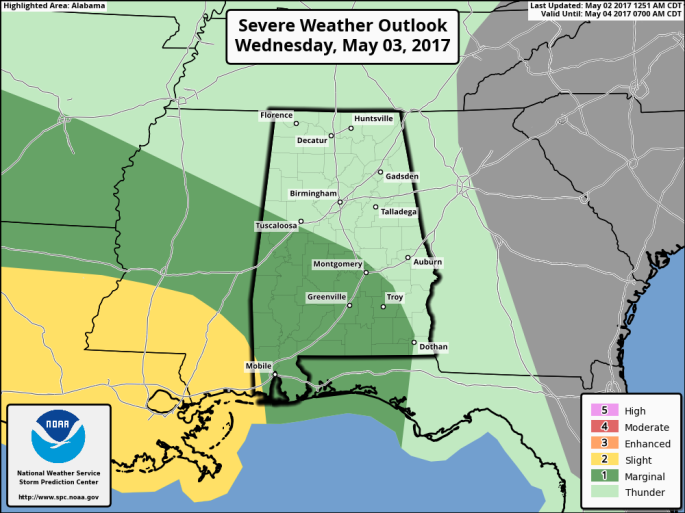 For the evening hours, it appears that we’ll have a high shear/low CAPE setup in the atmosphere over the southern 2/3rds of Central Alabama. SPC has an area defined in a marginal risk for severe storms on Wednesday evening through Thursday morning, roughly south of a line from near Tuscaloosa to just north of Montgomery to Dothan. A line of storms will move into the western counties after 8PM and transverse across the area during the overnight and into the late morning hours on Thursday. The main threat will be from damaging wind gusts, but a few brief spin-up tornadoes are possible.

Remember, we are still in the peak of our severe weather season, and every system bears watching. While the overall threat looks low, we still need to keep our eye on this. At this time of the year when it comes to thunderstorms, you have to “expect the unexpected.”

BEACH FORECAST
From the shores of Fort Morgan to the sands of Panama City Beach, click here to see what the forecast holds on our Beach Forecast Center page.

ON THIS DAY IN WEATHER HISTORY – May 2, 1929
Virginia’s worst tornado disaster occurred. Six tornadoes, two of which were west of the Blue Mountains, killed 22 people. Twelve children and a teacher were killed at Rye Cove, in Scott County. Four schools were destroyed by the storms.