What a nice day across North/Central Alabama at the midday hour. Temperatures across the area are ranging from the lower 70s near the Alabama/Tennessee state line, to the upper 70s to near 80 degrees in the southern portions of Central Alabama. The cool spots are currently Huntsville and Albertville at 72º, while the warm spot is currently Eufaula at 80º. Highs will continue to climb into the lower to mid 80s across the area, with a few spots in the southern parts of Central Alabama hitting the upper 80s.

A cold front will be moving into the northern parts of the state later this afternoon and make it into Central Alabama later tonight. Ahead of the front, a few showers and thunderstorms are possible mainly in the northeast corner of the state, and a mesoscale convective system (MCS) will be moving in just behind those. 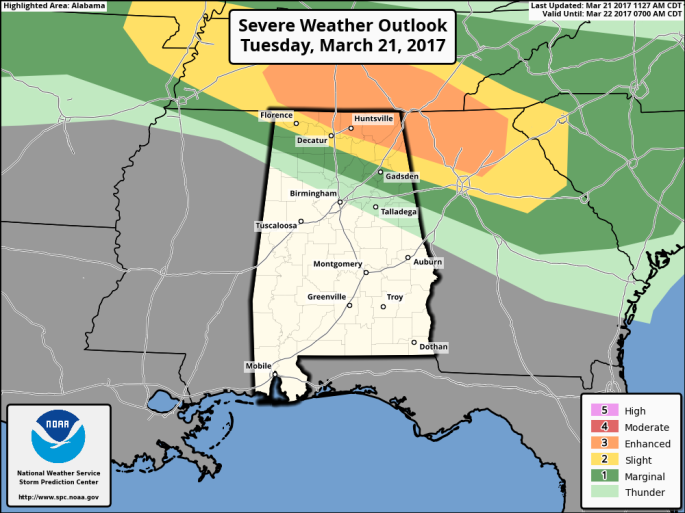 The SPC has the northeast corner of the state in an Enhanced Risk for severe storms tonight, with a small sliver to the south in the standard “Slight Risk.” The main threat with the MCS will be from damaging straight-line winds and some hail, with a larger hail threat with any storms that develop out ahead of the MCS. The good news is that the tornado threat is very low, but straight-line winds can cause just as much, if not more, damage as a small tornado.

The window for strong to severe storms in the northern parts of the state, especially north of a line from Rogersville to New Hope to Geraldine, will be 4:00PM – 8:00 PM this evening, with much of the activity out of the state by 9:00 PM.

For locations south of a line from Red Bay to Haleyville to Hanceville to Anniston, you will more than likely stay dry through the evening and overnight hours, and skies will be mostly clear for much of the area. Clouds will move in during the pre-dawn hours on Wednesday along with the front as it moves south through Central Alabama. Lows will be in the 50s across the area.

On Wednesday, the front will have made it to the extreme southern parts of Central Alabama, but we’ll have a vorticity max to move through to the northwestern flow. This could bring a few scattered showers mainly for the northeastern 2/3rds of the state, and highs will be a little cooler reaching the mid 60s to the lower 80s across the area. Skies will mainly be mostly cloudy. Lows tomorrow night will be in the upper 40s to the mid 50s.