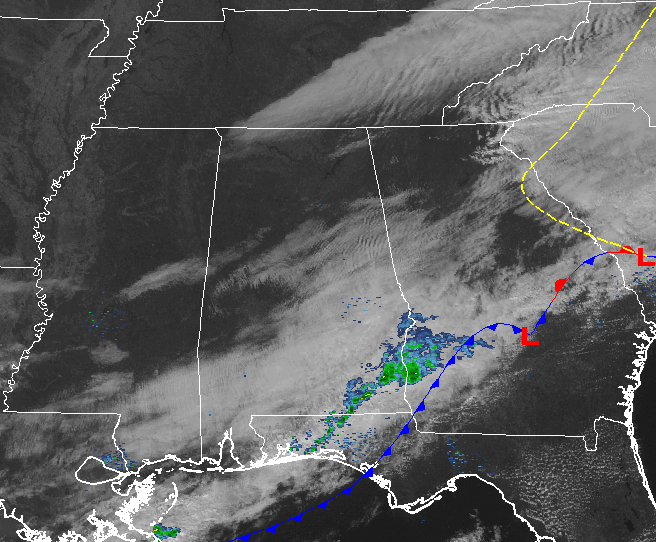 Clearing skies are starting to take place across the northern parts of Central Alabama at this hour, with most of the clouds now along and south of the I-20 and I-20/59 corridors. The cold front that has brought us the colder air and cloudy skies has now pushed out of the state and is now draped over southern parts of Georgia and down over the panhandle of Florida. The only shower activity in the state at this moment is down over the southeastern corner of the state.

For the remainder of the afternoon and early evening, skies will continue to clear out and decent sunshine can be expected. Afternoon highs will be in the mid 40s to the upper 50s across Central Alabama from northwest to southeast. Any remaining clouds will clear out for the evening and overnight hours, and lows will drop into the mid 20s to the mid 30s across the area. So be sure to grab those winter coats if heading out tonight. 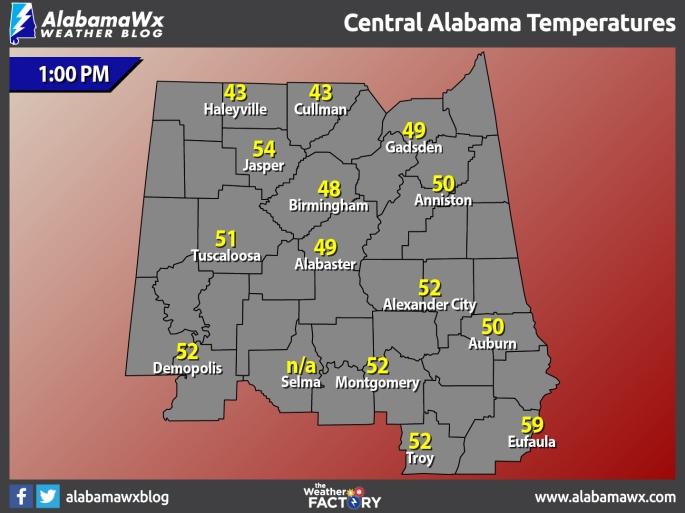 Temperatures Across Central Alabama
At 1:00 PM, temperatures are ranging from the lower 40s to the upper 50s across the area. The warm spot is currently Eufaula at 59 degrees. The cool spots are Cullman and Haleyville at 43 degrees.

What To Expect For The Weekend
Sunny skies and chilly temperatures to start off the day on Saturday, as morning temperatures will start off in the mid 20s to the mid 30s across Central Alabama. Temperatures will be normal for afternoon highs, with mostly mid to upper 50s across the area, with a few spots in the south reaching at or just above 60 degrees. Clouds will make a comeback on Saturday night, and Sunday will be a mostly cloudy day across the area. Models are hinting at some patchy light rain during the morning, but otherwise it should remain dry. Afternoon highs will be in the upper 50s to the mid 60s across the area.

For Those Headed To The Beach
A mix of sun and clouds can be expected from today through Thursday, with small chances of rain on today and for Tuesday and Wednesday. Highs will be in the 60s to lower 70s with the exception of tomorrow, when the highs will drop back into the 50s. Click here to see the Beach Forecast Center page.

National Extremes
The warmest high temperature set for the nation on Thursday afternoon was 88 degrees, set in McAllen, Texas. The coldest low temperature for Thursday night and into this morning was -36 degrees, set in Lamar Ranger Station YNP, Wyoming. The highest precipitation total for the 24 hour period starting at 12PM Thursday to 12PM today was 0.83 inches at Redding, California.

On This Day In Weather History: 1990
Thunderstorms developing ahead of a cold front produced severe weather over the central Gulf coast states during the afternoon and evening hours. Thunderstorms spawned seven tornadoes in Alabama, including one which touched down north of Birmingham injuring fifteen people and causing nearly three million dollars damage. A tornado at Margaret injured eleven persons and caused a million dollars damage.