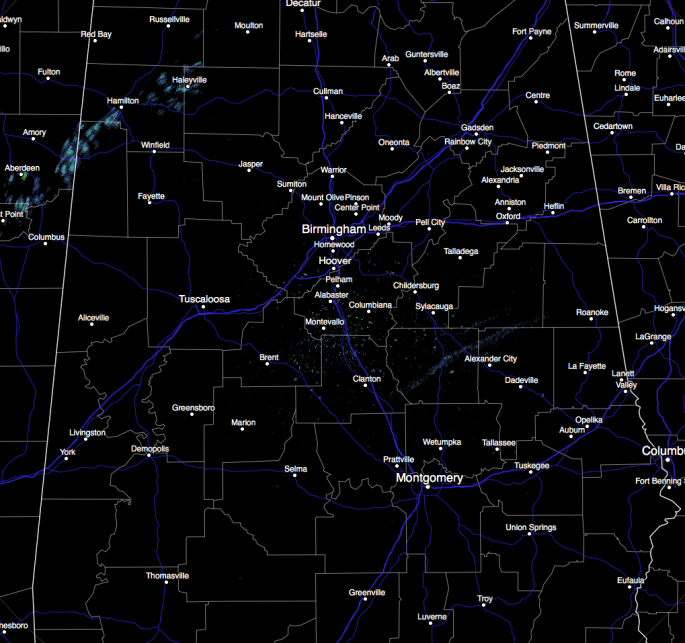 Only a few scattered areas of light rain or sprinkles are showing up on radar at this time, and they are located in the northwestern parts of Central Alabama from Detroit in northwestern Lamar County, stretching up to Hackleburg in northern Marion County. 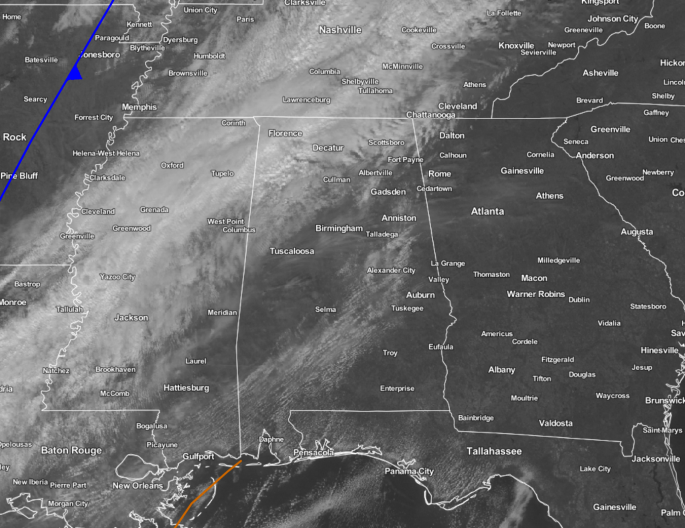 For the rest of the area, skies are partly to mostly cloudy at the 1:00 PM hour. Temperatures are a little cooler where the thicker cloud cover is, but from I-20 and south, it’s mild at midday.

For the rest of the day, a band of showers will move through Central Alabama later this afternoon and tonight. There will probably be enough instability for a few claps of thunder, but the chance for severe weather is zero. For most of the area, rain amounts should be less than 1/2 inch, but a few locations could receive a little more. Afternoon highs will be in the low 60s to the low 70s across the area, with overnight lows mainly in the 40s. 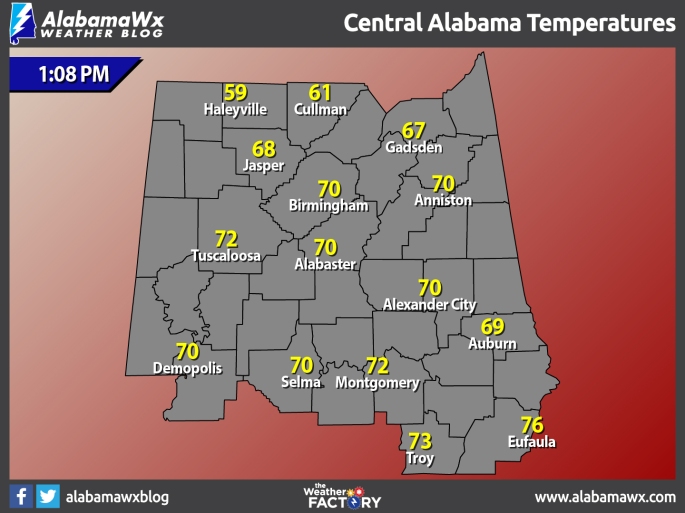 Temperatures Across Central Alabama
At 1:08 PM, temperatures are ranging from the upper 50s to the mid 70s across the area. The warm spot is currently Eufaula at 76 degrees. The cool spot is Haleyville at 59 degrees.

Colder Air Arrives on Thursday
The sky will be partly to mostly sunny tomorrow, with afternoon highs in the upper 40s to the upper 50s across Central Alabama from north to south. There is a very good chance that the northern parts of Central Alabama will see a freeze early Friday morning… the first time since January 9. Skies will be partly cloudy, and overnight lows will be in the lower to mid 30s across the area.

For Those Who Are Beach Bound
Plenty of sunshine in the forecast, and though a few showers and thunderstorms are possible during the night tonight, the forecast looks pretty good at the beach. Today it will be near 70 degrees, but the highs will be in the 50s through the rest of the week and into the first of next week. Click here to see the AlabamaWx.com Beach Forecast Center page.

On This Day In Weather History: 1821
The Hudson River was frozen solid during the midst of the coldest winter in forty-one years. Thousands of persons crossed the ice from New York City to New Jersey, and refreshment taverns were set up in the middle of the river to warm pedestrians.