Interesting Weather For Central Alabama For The Next 24 Hours
At the 11 o’clock hour for Central Alabama, skies are partly to mostly cloudy across the southern half of the area, with partly to mostly clear skies for the northern half. The cold front that moved through on Tuesday stalled out during the overnight hours in South Alabama, and has begun a journey to the north as a warm front. A trough with an associated cold front is making its way toward the state, and is causing advection out ahead of it. Our dewpoints will be on the increase today, and we may have enough ingredients tonight for a few strong to severe storms. 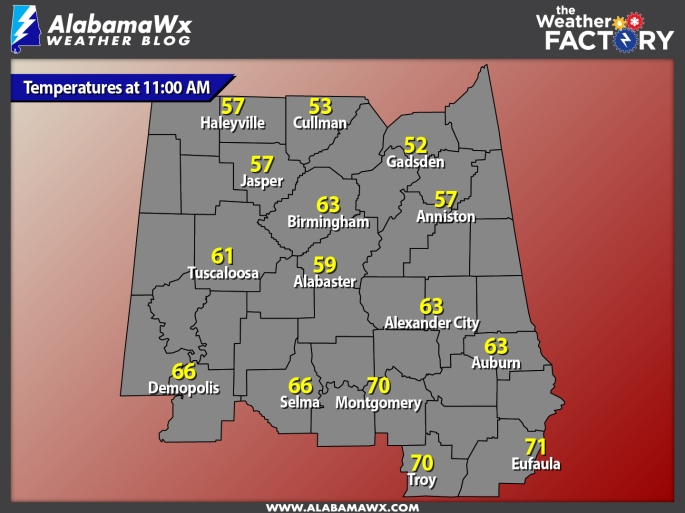 Remainder Of The Day
This evening could be very interesting with a chance of severe storms moving in after 10:00 PM and going through the early morning hours on Thursday. The Storm Prediction Center currently has nearly all of northern half of the state defined in a “Marginal Risk” for severe storms on their Day 1 Severe Weather Outlook. The cold front that pushed slowly through our area on Tuesday stalled out over the extreme southern parts of the state. This front will start to move back northward as a warm front later this afternoon and evening. Another cold front will be moving into the area tonight and is expected to strengthen as it arrives.

Throughout the day today, skies will be partly to mostly cloudy, and a stray shower or two is possible for the western half of the area. Afternoon highs will be in the mid 60s to mid 70s across the area from north to south. The main window for thunderstorms and the possibility for strong to severe storms will start in the northwestern corner of the area between 9PM-11PM, progressing to the Birmingham Metropolitan Area by 12AM-2AM, and reaching the Gadsden/Anniston area by 1AM-3AM.

The main threats for tonight’s event will be from strong straight-line winds and small hail, but a few tornadoes cannot be ruled out at this time. Instability (CAPE) values will be on the low end, around 300-700 J/kg, with dewpoints increasing into the low to mid 60s ahead of the cold front. If enough instability is allowed to develop, there will be enough shear to support supercellular storms, and enough to support updrafts.

Before going to bed, just make sure you have your weather radio and another reliable source of receiving severe weather information close by. We’ll have updates on the blog throughout the day on this developing situation.

Thursday’s Weather
After the rain moves out of the area, skies will quickly clear out and the afternoon will be sunny. There will be a breeze out there throughout the day, as winds will be averaging 10-15 MPH out of the northwest. Afternoon highs will be in the low 50s in the northwest, to the mid 60s in the southeast. A clear night is expected for Thursday evening, and overnight lows will be in the low to mid 30s.

Going To The Bowl Game
Rain will have moved out of the Birmingham Metropolitan Area well before the 1:00 PM CST kickoff between South Florida and South Carolina, and skies will be clear throughout the remainder of the afternoon. Temperatures at kickoff will be near 53 degrees, and falling to near 50 degrees by the final whistle. It will be quite breezy at Legion Field, with winds out of the northwest averaging around 15 MPH.

On This Day In Weather History: 2004
Los Angeles (downtown) broke a daily rainfall record for the month of December (5.55 inches). This was the third wettest calendar day in Los Angeles since records began in 1877.