Mostly Cloudy Across Central Alabama At 11:30 AM
Mostly cloudy skies and warm temperatures for a late December midday are being experienced across the Central Alabama area at this time. There are a few scattered showers showing up on radar, with most of the activity located over southeastern Jefferson County. More showers are located over northern Cullman County, over in eastern Calhoun, northern Cleburne, southern Cherokee counties, and in parts of Fayette, Walker, and Pickens counties. These are all pushing off to the north-northeast. 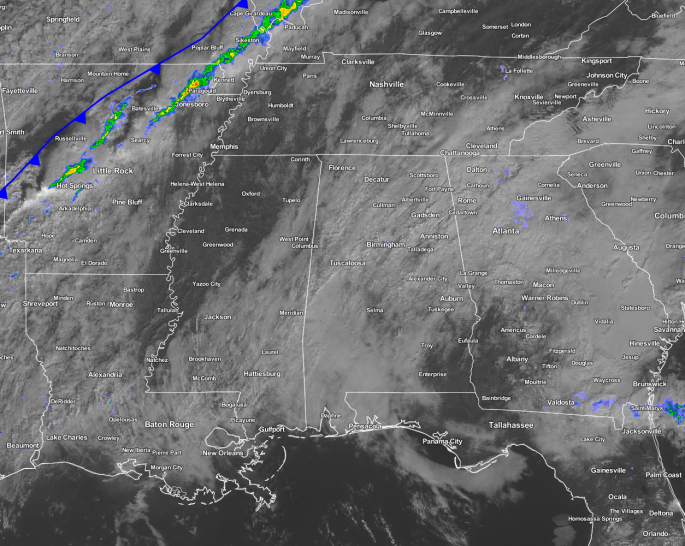 Across the southeastern United States at this time, a cold front is draped over southeastern Missouri, northwestern Arkansas, and back into southeastern Oklahoma. A thin line of showers and storms are just ahead of the front. The cells in the line are moving to the northeast, while the line itself is progressing very slowly to the east. There are no severe watches or warnings currently in effect across the southeast.

The Remainder Of The Day
It will be a warm afternoon across Central Alabama, with cloudy skies and a few light showers or sprinkles possible for areas north of a line from Demopolis to Clanton to Alexander City. Highs will be in the upper 60s to mid 70s, with the cooler air located the northeastern locations of the area. The risk for rain will increase for the evening and overnight areas tonight, especially for the northwestern locations of the area. Patchy fog will be possible in the southern half of the area, as temperatures and dewpoints will equalize after midnight and during the early morning hours. Overnight lows will be in the upper 50s to low 60s. Rain totals for the day will be 0.10 inches or less.

Tuesday’s Weather
A continuation of today’s weather, as cloudy skies and a 50/50 chance of rain for much of the area, especially north of the I-20 and I-20/59 corridors. Chances of rain drop as you head south from there, and some locations such as Troy and Eufaula will be dry during the day. Highs will be in the low 60s to the mid 70s across the area from northwest to southeast. Most areas will receive 0.10 inches or less, but a few locations in the northwestern part of the area could receive over 0.25 inches. For the evening and overnight hours, rain chances will diminish and skies will be mostly cloudy afterwords. Lows will be much cooler, as they will range from the mid 40s in the north, to the mid 50s to the south.

On This Day In Weather History: 2003
A major snow storm in Utah caused several fatalities due to avalanches. As much as 2 ft of snow fell in parts of the state, particularly south of Salt Lake City. Three people that were seen snowboarding in the Aspen Grove recreational area have been presumed dead, all others managed to escape or be rescued.