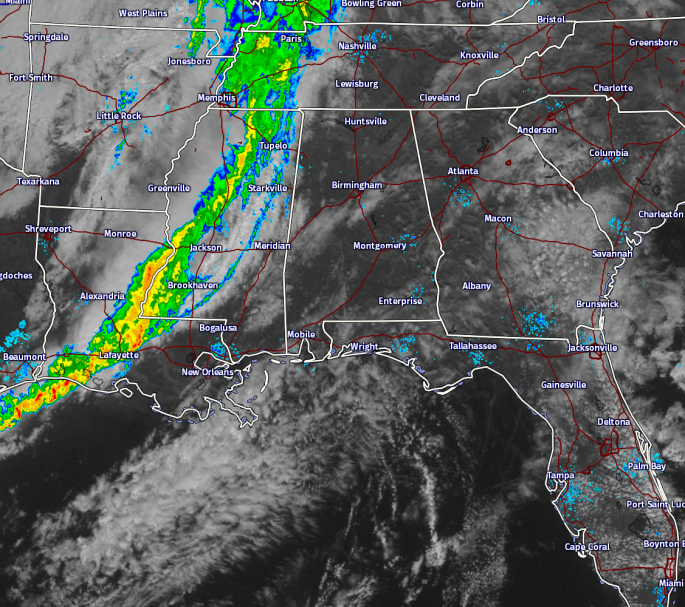 AT MIDDAY, THE RAIN IS NOT THAT FAR AWAY
The latest Sat/Rad image shows mostly clear skies at the 11AM hour across Central Alabama, with a line of showers and a few thunderstorms located across Western Tennessee, through Central and Southwestern Mississippi, and back into East-Central to Southwest Louisiana.

The northwestern parts of the state should start seeing rain around the noon hour, with the line slowly progressing to the east and dissipating as it encounters much drier air. The latest run of the HRRR has the main band of showers mostly dissipating before reaching the I-65 corridor and leaving behind some scattered showers through the remainder of the evening and into the early morning hours of Thanksgiving Day. LATEST DATA FROM THE U.S. DROUGHT MONITOR
The latest data from the U.S. Drought Monitor for the state of Alabama now shows that over 65% of the state is now classified under “extreme” or “exceptional” drought conditions. That is an increase of over 13% from last week. A Drought Emergency continues in effect, banning any outdoor burning for all counties in the state. Click here for more information. Be sure to conserve water as well, as the Birmingham Water Works remains in a “Stage 4 Drought Emergency.”

FOR THE REST OF YOUR WEDNESDAY
As the surface boundary moves closer to the area, clouds will start to build and become cloudy across the area. Chances for rain will be greatest over the northwestern parts of the area (especially north of the I-20/59 corridor and west of I-65) and drop as you move southeast across the area. Afternoon highs will be in the 65 to 75 degree range across the area, with cooler temps in the northwest, and warmer temps in the southeast. Scattered light showers will be coming to an end during the overnight and early morning hours, and lows should dip down into the upper 40s to the upper 50s. Rain totals will be light across the area, around and below 1/10th of an inch being the norm. A few places will only get a few sprinkles to no rain at all, especially east of I-65.

WHAT TO EXPECT FOR “TURKEY DAY”
There may be a few lingering sprinkles or very light showers during the early morning hours, and skies will be clearing throughout the remainder of the morning and early afternoon hours. Temperatures will be nice and warm, with highs ranging in the 65 to 75 degree range throughout the area, with temperatures getting close to 80 degrees down near the Troy and Eufaula areas in the extreme southeastern parts of the area.

FOR THOSE WHO ARE BEACHBOUND
Mostly sunny days, fair nights on the Gulf Coast through the weekend with highs mostly in the 70s from Gulf Shores over to Panama City Beach.

UPDATE ON THE TROPICS
Tropical Storm Otto is forecasted to move onto the shores somewhere around Southern Nicaragua and Northern Costa Rica sometime during the later morning hours tomorrow as a possible hurricane, before emerging over the Pacific Ocean on Friday as a Tropical Storm and will receive a new name. Winds are currently at 70 MPH sustained, and movement is slow to the west-northwest at 5 MPH. The rest of the Atlantic Basin is quiet.

ON THIS DAY IN 2004
An outbreak of severe thunderstorms produced reports of 54 tornadoes across portions of Texas, Louisiana, Arkansas and Alabama. In Texas’s Hardin county, one person was killed with three injured when a tornado struck during the afternoon.

NUMBER OF THE DAY: 66
Tuscaloosa is currently sitting at day number 66 of the current consecutive rain-free streak for the city. If no measurable rain falls before midnight tonight, that total would go up to 67. Remember, Birmingham’s streak ended at 61 before 1/100th of an inch fell at the Birmingham Airport early on Saturday morning.