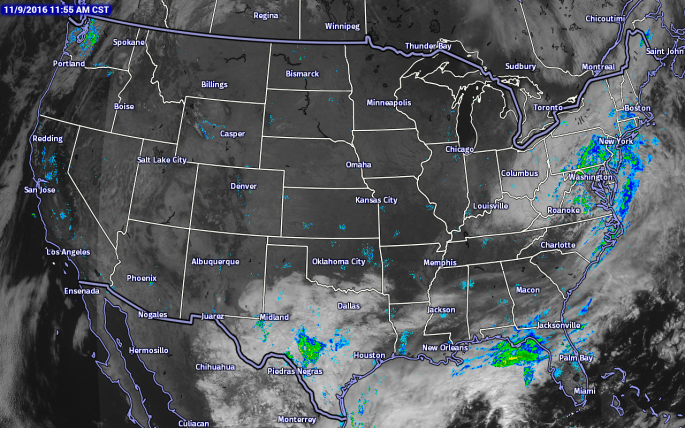 Clouds are starting to thin out across Central Alabama, and the closest rain action to the area is located over parts of the Florida Panhandle and out into the Gulf of Mexico. More rain is located along the Atlantic Coast from North Carolina all the way up into Massachusetts, with another small mass of showers in South-Central Texas.

I mentioned above that we’ll tie a record today, and that will be for longest consecutive rain-free days for the city of Birmingham. Today will be 52 days in a row without measurable rain at the Birmingham Airport (where data is collected for the city), tying a record that was set back in 1924. We will break that record at the end of the day tomorrow, as conditions will be sunny and dry.

TEMPERATURES ACROSS THE STATE AT 12:00PM CST
Most communities in Central Alabama are ranging throughout the 60s and 70s at this point. The warm spot in the area is Montgomery at 74, while the cool spot is Cullman at 63.

NO OUTDOOR BURNING AT ALL
A Drought Emergency continues is now in effect for all 67 Alabama counties, banning any outdoor burning. Click here for more information.

REST OF TODAY
Skies will continue in the process of clearing out from the north to the south, so partly cloudy throughout the remainder of the afternoon, transitioning to mostly clear skies for the evening and overnight hours. Afternoon highs will be in the low to mid 70s, with a few spots not getting out of the 60s in the extreme northern parts of the area. Overnight lows will mostly be in the 40s, with the cooler pockets reaching the 30s.

THURSDAY’S FORECAST
Day 53 in the rain-free streak, setting the all-time record for Birmingham. The morning will start off rather chilly, with clear skies and temperatures mostly in the 40s at 6AM. The sun will be out in full force during the daytime hours, with afternoon highs reaching the upper 60s to low 70s throughout Central Alabama. Skies will remain clear throughout the evening and overnight hours, with lows dropping back down into the upper 30s to the low 40s.

FRIDAY THROUGH THE WEEKEND
Sunny days and clear nights, with not a single drop of rain in the forecast. Afternoon highs will be in the low 70s on Friday, dropping down into the 60s over the weekend as a reinforcing shot of cool and dry air moves in. Lows will mostly be in the upper 30s to low 40s, but many places drop into the 30s at daybreak Sunday, with potential for a freeze for the cooler pockets.

HIGH SCHOOL & COLLEGE FOOTBALL
Clear skies and getting cool for the high school games on Friday, with temperatures starting off in the low 60s at kickoff and dropping off into the mid 40s by the final whistle.

Alabama is hosting Mississippi State on Saturday at Bryant-Denny Stadium, and the weather will be perfect for football. Sunny skies throughout the game, with temperatures starting of in the low 60s at the 11AM CST kickoff, and climbing into the upper 60s by the 4th quarter.

Auburn will be visiting the Georgia Bulldogs in Athens, and the forecast there will be perfect as well. Clear skies with temperatures in the mid 60s for the 2:30PM CST kickoff and falling back into the upper 50s by the end of the game.

HEADED TO THE BEACH
Rain ends later today, then expect sunny days and fair nights tomorrow through early next week from Panama City Beach to Gulf Shores with highs mostly in the 70s.

THE TROPICS
The Atlantic Basin is quiet, and tropical storm formation is not expected through the next five days. Good news is that the Atlantic Hurricane Season comes to a close at the end of this month.

ON THIS DAY IN 1982
Seven tornadoes touched down in southern California, three of which began as waterspouts. The waterspouts moved ashore at Point Mugu, Malibu, and Long Beach. The Long Beach tornado traveled inland ten miles causing much damage.