ANOTHER RECORD HIGH BROKEN TODAY?:
If you are a fan of classic rock, then you will easily remember this hit from Queen, “Another One Bites The Dust.” I do not see it being an issue for the Birmingham Airport getting up to 88 degrees to tie the record, and I do believe 89 is very possible. I will even go out on a limb and say it will touch 90 degrees today. So my answer is yes, “Another One Bites The Dust.”

One thing that helps my reasoning is that skies are mostly clear out there across Central Alabama, and the winds are blowing out of the south averaging around 5 MPH. With that, along with the ground being very dry, that will allow the air to warm quickly. There is one thing that could throw us a curveball today: the possibility of an isolated shower.

Looking at the latest run of the HRRR, it is depicting the development of isolated to scattered showers across some of the area for later this afternoon. It showed development as well yesterday, but unfortunately rain could not be found. I’ll give it another shot today and say some will develop and a few people in the area will be blessed with a short shower. More than likely those showers will develop in the northwestern parts of Central Alabama, especially north of I-20/59 and west of I-65.

BURN BAN AND FIRE ALERT:
A Drought Emergency continues in effect, banning any outdoor burning for the northern two-thirds of the state. A Fire Alert remains in effect for the whole state. Only those counties outside of the Drought Emergency can burn outdoors after obtaining a burn permit from the Alabama Forestry Commission, but these will be restricted and issued on an individual basis. Click here for more information..

AIR QUALITY:
Both Ozone and Particulate Matter 2.5 levels will be below criteria to raise an Air Quality Alert for the Birmingham metropolitan area today. No actions needed.

REST OF TODAY:
Skies will remain mostly clear throughout the afternoon hours, with a very slight risk of an isolated shower for areas north of I-20. Afternoon highs will reach the upper 80s with a few locations touching 90 degrees. The odds for any one spot getting rain today will be around one in five. For tonight, a few more clouds will start to move into Central Alabama, but it should remain dry. Overnight lows will be in the 60s throughout the area.

TOMORROW’S FORECAST:
A cold front will begin to push through Central Alabama tomorrow evening and make its way out by Friday morning. Ahead of the front, skies will be partly cloudy to start, with more clouds building as the day progresses. There will be enough instability for the development of showers and storms, but fortunately not enough to support an organized severe weather threat. 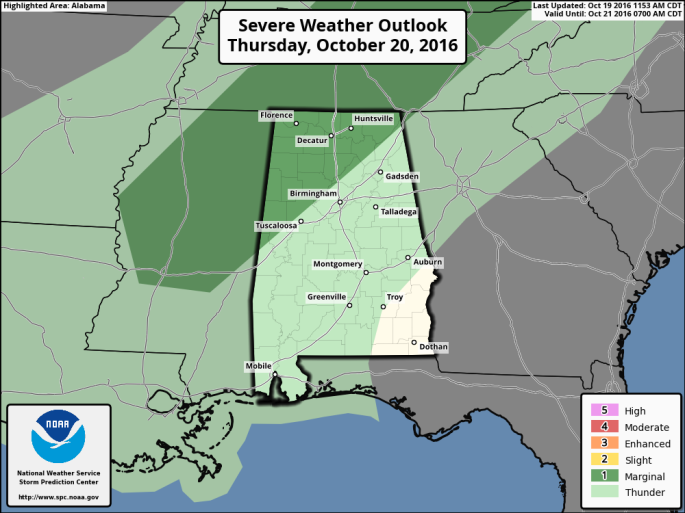 But we do note that the SPC has defined the northwestern part of the state under a Marginal Risk for severe storms, with the main risk being damaging straight line winds. The better chances of showers and storms will be in the northwestern parts of the area, and gradually lowers as you move to the southeast. Rain totals will be 1/2 inch or less, with many communities getting less than 1/10 inch. Afternoon highs will still be warm, in the 80s. Once the front passes, any rain chances will be done.

HEADED TO THE BEACH:
The weather stays dry through most of next week with sunny days and clear nights. Highs in the 80s today and tomorrow, dropping into the 70s by Friday and the weekend. 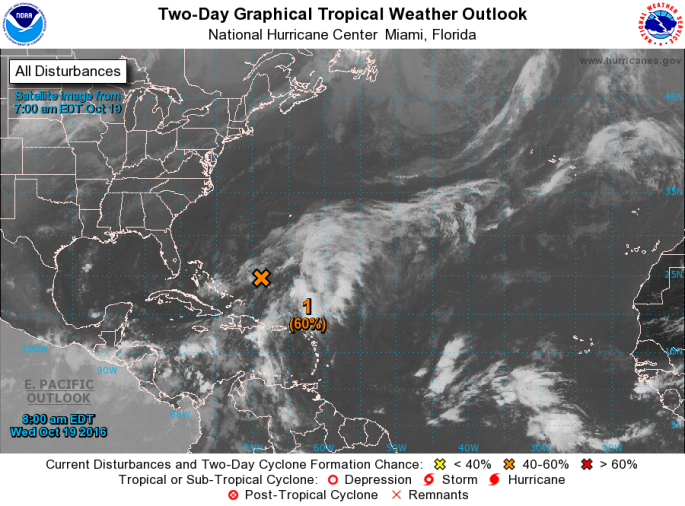 TROPICAL UPDATE:
A disturbance east of the Bahamas has a chance of becoming a tropical or sub-tropical storm soon, but it will move northward and won’t be an issue for the U.S.

ON THIS DAY IN 1988:
Thunderstorms produced high winds in eastern Colorado, with gusts to 63 mph reported at La Junta.